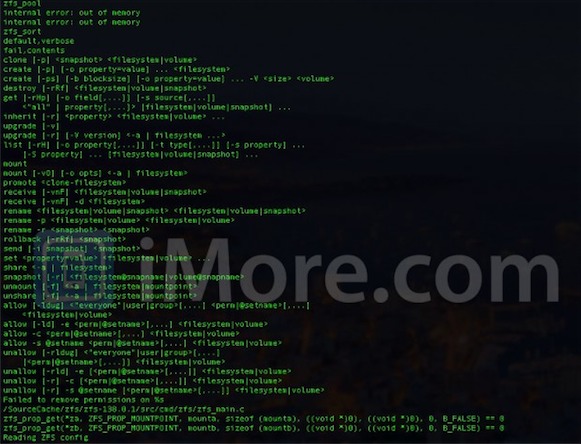 What sets this iOS implementation apart from some of the very original, official, OS X ports of ZFS is that it already contains the ZFS utilities (zpool, zdump, etc). By having the utilities already installed it means that the port is in a more complete stage of development and has full read + write access (unlike the original OS X ports).

In computing, ZFS is a combined file system and logical volume manager designed by Sun Microsystems. The features of ZFS include data integrity verification against data corruption modes, support for high storage capacities, integration of the concepts of filesystem and volume management, snapshots and copy-on-write clones, continuous integrity checking and automatic repair, RAID-Z and native NFSv4 ACLs. ZFS is implemented as open-source software, licensed under the Common Development and Distribution License (CDDL). The ZFS name is a trademark of Oracle.

The first indication of Apple Inc.'s interest in ZFS was an April 2006 post on the opensolaris.org zfs-discuss mailing list where an Apple employee mentioned being interested in porting ZFS to their Mac OS X operating system.[68] In the release version of Mac OS X 10.5, ZFS was available in read-only mode from the command line, which lacks the possibility to create zpools or write to them.[69] Before the 10.5 release, Apple released the "ZFS Beta Seed v1.1", which allowed read-write access and the creation of zpools,[70] however the installer for the "ZFS Beta Seed v1.1" has been reported to only work on version 10.5.0, and has not been updated for version 10.5.1 and above.[71] In August 2007, Apple opened a ZFS project on their Mac OS Forge web site. On that site, Apple provided the source code and binaries of their port of ZFS which includes read-write access, but there was no installer available[72] until a third-party developer created one.[73] In October 2009, Apple announced a shutdown of the ZFS project on Mac OS Forge. No explanation was given, just the following statement: "The ZFS project has been discontinued. The mailing list and repository will also be removed shortly." Versions of the previously released source and binaries, as well as the wiki, have been preserved and development has been adopted by a group of enthusiasts.[74][75] Complete ZFS support was once advertised as a feature of Snow Leopard Server (Mac OS X Server 10.6). However, all references to this feature have been silently removed; it is no longer listed on the Snow Leopard Server features page.[76] Apple has not commented regarding the omission.

The MacZFS project mirrored the public archives of the Apple ZFS before they disappeared,[74] and has grown into a community-maintained project, producing releases of ZFS for most recent versions of OS X, including Lion (10.7).[74] The project has an active mailing list. As of January 2012, MacZFS implements zpool version 8, the version from the October 2008 release of Solaris.

In January 2012, the company Ten's Complement LLC released a ZFS implementation for Mac OS X called "Zevo" which includes both GUI and command-line features. As of January 2012, Zevo implements zpool version 28, the same as FreeBSD 9.0. The first "Silver" release of Zevo does not include compression, snapshots, or RAIDZ, although it does enable checksumming. Future releases of Zevo, slated for release later in 2012, will offer additional features. The company was founded by Don Brady, a former Apple engineer who was technical lead on the original HFS+ team and worked on Apple's abandoned internal project to port ZFS.