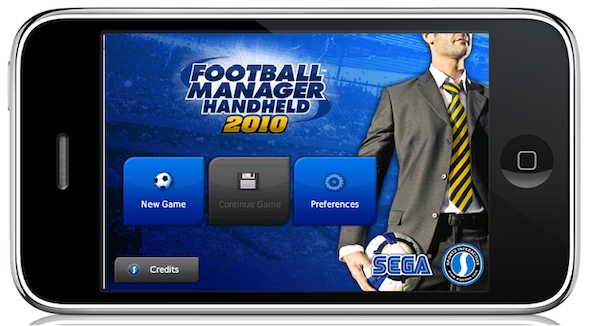 "Over the last few months, the most asked question of us on Twitter and Facebook has been "when is Football Manager coming to iPhone/iPod?", and we've confidently pointed out that it wasn't coming.

When people have asked "when is Football Manager Handheld coming to iPhone/iPod" we've been very quiet.

We expect it will be live in the iTunes Store within the next 48 hours!

We are expecting some reviews today from journalists who received ridiculously limited edition Football Manager Handheld iPod Touches (engraved by the people who engrave the FA Cup!) with the game pre-installed on it, which has been the only way anyone outside of SI and SEGA has been able to see the game. Links to the reviews will be posted here as soon as they are available so keep an eye out.

There will also be a competition to win one of these devices in the coming weeks which we will be announcing more details on later in the week.

What a start to the week! "

My life's goal is only to fight

Sports Interactive & SEGA® Europe Ltd. today can announce that the Football Manager Handheld™ 2010 App for and iPod touch is available now on the .

Developed by Sports Interactive, Football Manager Handheld™ 2010 brings the unrivalled realism of the critically acclaimed Football Manager series to the and . Players can choose a team from 34 leagues across 11 different countries and try to take their chosen club to the very top of the football world.Take control of all aspects of football management; negotiating player contacts and transfers, managing a squad of up to 36 players and setting tactics, formations, as well as team and individual player instructions.

“It’s great to be able to finally reveal all and have our new App available for people to buy,” said Miles Jacobson, Studio Director at Sports Interactive. “We’ve fitted more than we ever imagined into the game, and the results speak for themselves – it’s the most in-depth football management game so far released on the iPhone or iPod touch, with a bargain price point for what you get, and we’re really excited to see the reaction to the game from football fans all over the world.”

The Football Manager Handheld 2010 App is available for £6.99 from the App Store on iPhone and iPod touch or at http://itunes.apple.com

For the full features list and screenshots check out the iPhone/iPod webpage.