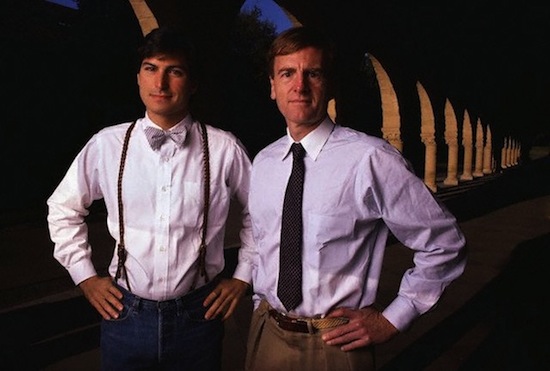 I didn’t know really anything about computers nor did any other people in the world at that time. This was at the beginning of the personal computer revolution, but we both believed in beautiful design and Steve in particular felt that you had to begin design from the vantage point of the experience of the user.

He [Steve Jobs] was a person of huge vision. But he was also a person that believed in the precise detail of every step. He was methodical and careful about everything — a perfectionist to the end.

What makes Steve’s methodology different from everyone else’s is that he always believed the most important decisions you make are not the things you do – but the things that you decide not to do. He’s a minimalist.

He was extremely charismatic and extremely compelling in getting people to join up with him and he got people to believe in his visions even before the products existed. When I met the Mac team, which eventually got to 100 people but the time I met him it was much smaller, the average age was 22.

The other thing about Steve was that he did not respect large organizations. He felt that they were bureaucratic and ineffective. He would basically call them “bozos.” That was his term for organizations that he didn’t respect.

And an engineer would bring Steve in and show him the latest software code that he’s written. Steve would look at it and throw it back at him and say: “It’s just not good enough.” And he was constantly forcing people to raise their expectations of what they could do. So people were producing work that they never thought they were capable of.

The thing that separated Steve Jobs from other people like Bill Gates — Bill was brilliant too — but Bill was never interested in great taste. He was always interested in being able to dominate a market. He would put out whatever he had to put out there to own that space. Steve would never do that. Steve believed in perfection.

In his level of perfection, everything had to be beautifully designed even if it wasn’t going to be seen by most people.

The one that Steve admired was Sony. We used to go visit Akio Morita and he had really the same kind of high-end standards that Steve did and respect for beautiful products. I remember Akio Morita gave Steve and me each one of the first Sony Walkmans. None of us had ever seen anything like that before because there had never been a product like that. This is 25 years ago and Steve was fascinated by it. The first thing he did with his was take it apart and he looked at every single part. How the fit and finish was done, how it was built.

People keep saying, “Well why didn’t we license the operating system?” The simple answer is that there wasn’t one.

What Steve’s brilliance is, is his ability to see something and then understand it and then figure out how to put into the context of his design methodology — everything is design.

as soon as the designers walked in the room, everyone stopped talking because the designers are the most respected people in the organization. Everyone knows the designers speak for Steve because they have direct reporting to him. It is only at Apple where design reports directly to the CEO.

Having been around in the early days, I don’t see any change in Steve’s first principles — except he’s gotten better and better at it.

The reason why I said it was a mistake to have hired me as CEO was Steve always wanted to be CEO. It would have been much more honest if the board had said, “Let’s figure out a way for him to be CEO. You could focus on the stuff that you bring and he focuses on the stuff he brings.”

All the design ideas were clearly Steve’s. The one who should really be given credit for all that stuff while I was there is really Steve.

Apple is not really a technology company. Apple is really a design company. If you look at the iPod, you will see that many of the technologies that are in the iPod are ones that Apple bought from other people and put together. Even when Apple created Macintosh, all the ideas came out of Xerox and Apple recruited some of the key people out of Xerox.