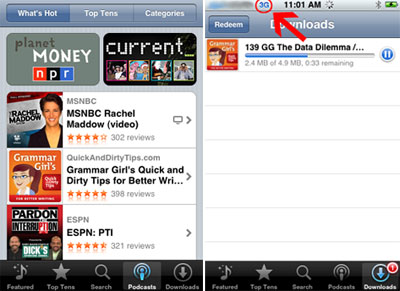 German iPhone news blog iphone-ticker.de, found out that Apple has been doing some work on side of their iTunes Store servers and expects the release of the next iPhone OS version during the next five days.

iphone-ticker.de points out that Apple is changing the iTunes direct links from the well-known format (http://phobos.apple.com/…) to the new http://itunes.apple.com/… Combined with the latest beta release of iPhone OS 2.2, which for the first time revealed the new podcast features, and the problems many users had during the last 24 hours while using the iTunes store, iphone-ticker.de guesses that the final release of iPhone OS 2.2 will take place during the next five days.