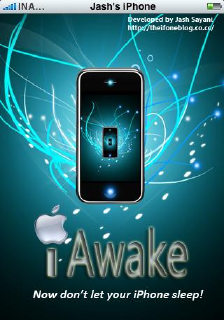 First of all, I’d like to thank you for maintaining your repository and hosting many good apps for the community.

On 27/05 ModMyiFone added an app called “iAwake2″ to their repo, and I just noticed today that you included this app too. It looked suspiciously similar to another app Insomnia that was released quite long ago and is available from Ste’s source.
I downloaded both apps and, unsurprisingly, both executables are absolutely identical. So iAwake2 is just a repackaged version of Insomnia with different graphics.
It is worth to note that the “developer” of iAwake2 claims that his app is based on Insomnia with “some bugfixes and performance improvements”. But Insomnia is distributed under GPL v3, and if any bugfixes are distributed in binary form, source code must be made available. Of course, he won’t do that because his app doesn’t differ from Insomnia.I bet this guy doesn’t even have a compiler, otherwise he could change the code so it would be less obvious that his app is a rip-off.

It’s sad that there are such “developers” who want cheap fame by misleading the users and this kind of behavior is completely against the open nature of the iPhone community. I hope you’ll take action and remove iAwake2 from your repository.

Sent from my iPhone

I was given this report below, and of course (at first) didn’t believe it was true. So I installed your iawake2 and insomnia and ran an md5sum comparison of both binaries, and it turns out that both binaries are identical. This means you could not have even taken the same source and recompiled the app because the timestamps in the resulting binaries would be enough to result in unique md5sums. This amounts to stealing the app, putting your own images in, and having it hosted as new, original content. This type of thing cannot be allowed in our community. It makes me look bad for hosting it in the first place. Therefore, I am pulling the package off my repository and also informing the other community source owners as well as NullRiver (all blind copied in this email) of the situation so that everyone is aware of what this package is and no one hosts it.