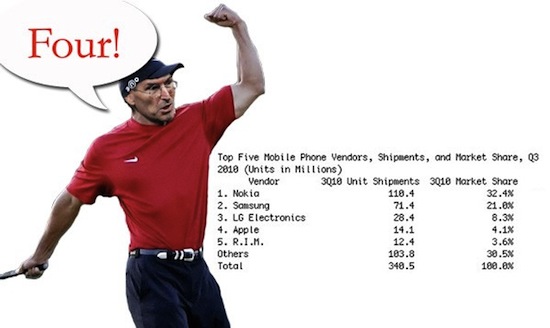 The growing popularity of converged mobile devices, or smartphones, with consumers and businesspersons is evidenced by the appearance of a second smartphone-only vendor in the top 5 ranking. Apple moved into the number 4 position worldwide in 3Q10, joining Research In Motion (RIM) as one of the world’s largest mobile phone suppliers. RIM has spent three quarters on IDC’s leaderboard. Apple and RIM also posted the highest-growth rates among the top 5 vendors last quarter.

“The entrance of Apple to the top 5 vendor ranking underscores the increased importance of smartphones to the overall market. Moreover, the mobile phone makers that are delivering popular smartphone models are among the fastest growing firms,” said Kevin Restivo, senior research analyst with IDC’s Worldwide Mobile Phone Tracker. “Vendors that aren’t developing a strong portfolio of smartphones will be challenged to maintain and grow market share in the future.”

Apple, RIM, and the vendors producing Android-based smartphones have put noticeable pressure on Nokia, the overall market leader. “Nokia still leads all vendors by a significant margin for converged mobile devices and mobile phones as a whole,” said Ramon Llamas, senior research analyst with IDC’s Mobile Devices Technology and Trends team. “However, Nokia’s grip on the traditional mobile phone market has been somewhat loosened, as multiple Chinese vendors have gained ground, especially within emerging markets. To bolster its overall competitiveness, Nokia has been focused on improving its smartphone offerings.”

IDC believes the worldwide mobile phone market will be driven largely by smartphone growth to the end of 2014. “The smartphone is becoming the focal point of the personal communications experience,” noted Restivo. “As a result, new market growth will be increasingly generated by smartphones. This year, we are expecting the smartphone sub-market to grow 55% year over year.”

Competitive forces emerged in the Asia/Pacific (excluding Japan) region last quarter to the detriment of market leader Nokia. In emerging markets, brands such as Micromax, Nexian, and i-Mobile chipped away at Nokia’s market share. Android-powered smartphones also gained momentum across the region at the expense of Nokia. Samsung gained ground in South Korea while Huawei, Lenovo, and ZTE launched devices in several markets. In Japan, mobile phone market growth was driven primarily by domestic vendors Sharp, Panasonic, Fujitsu, and NEC. The Western European mobile phone market’s growth was largely attributable to smartphones, which grew thanks to the iPhone 4 and Android-powered devices from HTC and Samsung. Demand was also stoked by large operator device subsidies that helped to keep consumer interest in smartphones high. At the same time, the CEMA handset market grew slowly in 3Q10. As a result, smartphone volumes are growing substantially but still only comprise one-fifth of total shipments for the regions combined. This is modest compared to more economically-developed regions. The United States mobile phone market was characterized by growth in the smartphone market. Grabbing headlines were the Apple iPhone 4, RIM’s BlackBerry Torch 9800, the HTC EVO 4G, and Motorola’s new DROID X and DROID 2, all of which were launched last quarter. Not to be overlooked was Samsung’s Galaxy S smartphone lineup, which were launched at all of the major carriers last quarter. Traditional mobile phones, meanwhile, fought back with smartphone-like functionality, but saw their overall share of the market continue to decline. In Canada, Android-powered handsets gained momentum as Samsung, LG, Sony Ericsson and Motorola shipped new models. Huawei and ASUS, low-cost providers of Android devices, entered the market. RIM’s BlackBerry Torch was announced while the iPhone 4 was introduced to great fanfare. Despite continued economic sluggishness in some countries, the Latin American region grew as a result of higher smartphone adoption. Vendors like Alcatel, ZTE, and Huawei have targeted Latin America aggressively with entry-level models in an effort to steal share from Nokia, the overall market leader in the region. These models are lower-cost product offerings designed to meet the needs of basic users. Motorola’s Android-powered devices have also grown quickly in the region due to the popularity of models like the QUENCH, Backflip, and Milestone.

Nokia maintained the top spot in the overall mobile phone market despite year-over-year unit shipment growth of less than 2% in new chief executive Steven Elop’s first quarter at the helm. The company grew converged mobile device shipments 61% in 3Q10, but average selling prices for the device type dropped to EUR136, compared to EUR190 in the same quarter last year. Nokia attributed the plunge to price pressure from competitors and its stated desire to reach more customers. Nokia hopes the C8 and C7 devices will boost ASPs in future.

Samsung marked a new milestone during the third quarter, pushing through the 70 million unit mark for the first time in the company’s history. In addition, the company more than doubled the number of converged mobile device shipments from the previous quarter. Driving this was the worldwide release of its Galaxy S i9000 converged mobile device, as well as its bada-based Wave model. Looking ahead to the fourth quarter, Samsung appears poised to bring more smartphones to market, with a new Wave 2 awaiting launch and more mass-market devices for emerging markets.

LG Electronics missed its 3Q10 total mobile phone and smartphone shipment growth targets, resulting in an overall double-digit shipment decrease when compared to the same quarter one year ago. LG has yet to make a significant impact in the smartphone category unlike its competitors. Although operating margin returned to the same levels as a year ago, sales and profitability both fell significantly. By the end of the quarter, LG replaced its CEO Nam Yong with Koo Bon-Joon, head of LG’s trading firm, LG International.

Apple leapt ahead of several vendors in 3Q10 including RIM, which it surpassed by 1.7-million units, and Sony Ericsson by 3.7-million units. The company’s record shipment performance can be attributed to the introduction of the iPhone 4 in 17 new countries last quarter. The record performance came despite “Antennagate,” the name used to describe the controversy around alleged iPhone reception problems, in July.

Research In Motion posted a record number of unit shipments in 3Q10. The BlackBerry maker continues to grow in Latin America, for example, due to the success of the Curve 8520 entry-level model, which has helped drive growth in most emerging markets. The vendor’s results were also boosted by the introduction of the higher-cost Torch in the United States, a key market due to the size and intensity of competition.

SonyEricsson, which shipped 10.4 million units in 3Q10, fell off the Top 5 list for the first time since the Tracker was conceived in 2004.

Note: Vendor shipments are branded shipments and exclude OEM sales for all vendors.

IDC is the premier global provider of market intelligence, advisory services, and events for the information technology, telecommunications, and consumer technology markets. IDC helps IT professionals, business executives, and the investment community to make fact-based decisions on technology purchases and business strategy. More than 1,000 IDC analysts provide global, regional, and local expertise on technology and industry opportunities and trends in over 110 countries worldwide. For more than 46 years, IDC has provided strategic insights to help our clients achieve their key business objectives. IDC is a subsidiary of IDG, the world’s leading technology media, research, and events company. You can learn more about IDC by visiting www.idc.com.

All product and company names may be trademarks or registered trademarks of their respective holders.